The first two chapters of the Bible, Genesis 1 and 2, are foundation chapters because they show the broad pattern of what God is doing. God’s work so far, as pertains to us, is outlined in these chapters as seven stages (or ‘days,’ see Topic 3):

We’re still in the 7th stage, but other stages will follow. The next stage will be ‘the day of the Lord,’ when Jesus Christ will come to earth again. But death will have sealed the eternal destiny of all people who have died before that time.

GOD’S PERSPECTIVE OF TIME IS LONG-TERM

Our minds rarely plan beyond ten years, and certainly not beyond a hundred years. A thousand years into the future is almost inconceivable to us.

The Bible says God has a different concept of time:

‘With the Lord, a day is like a thousand years, and a thousand years is like a day. The Lord is not slow in keeping his promise, as some understand slowness. He is patient with you, not wanting anyone to perish, but everyone to come to repentance.’

From our short-term perspective, it seems like God is inactive because we don’t see him doing anything new. But from God’s perspective, everything is right on schedule (it’s still the 7th day). The problem is that our minds can’t comprehend complex time concepts, like long ages and eternity, and because our short life span makes us impatient.

To understand what God is doing, we need to see his plan set in his time frame, as revealed to us in the Bible. Briefly stated, the plan is this:

God made the universe. Man is his crowning creation, made ‘in the image of God’ (literally, a little less than God), the only creature with body, soul and spirit, and possessing an eternal nature (continuing after death). God desires to have a personal love relationship with every human being.

Love can exist only when there’s free will. Thus God allows man to sin (make choices that are contrary to his character and his instructions). In old days, sins could be forgiven, and the relationship restored, when the sinner confessed and offered a sacrifice (preferably an animal blood sacrifice). When he sinned again, he would have to sacrifice again, over and over.

Then God offered a new plan. Jesus Christ (part of God in a human body) came to earth and died as the once-and-for-all sacrifice. Today all a person has to do is ‘believe’ (appreciate and personally accept what Jesus did), and this gives him an intimate and permanent relationship which entitles him to spend the rest of eternity with God (heaven). If a person knows about this plan but doesn’t appreciate and personally accept it, he will spend the rest of eternity separated from God (hell).

Everything is building toward the wonderful (or horrible) life after death, which we are individually determining now by the way we respond to God.

It’s not often that we take time to look at the really BIG picture. Some people never look at it. But seeing the whole panorama helps us understand how and why our personal response to God now determines our eternal destiny in life after death. This isn’t just speculation, it’s what God says in the Bible. 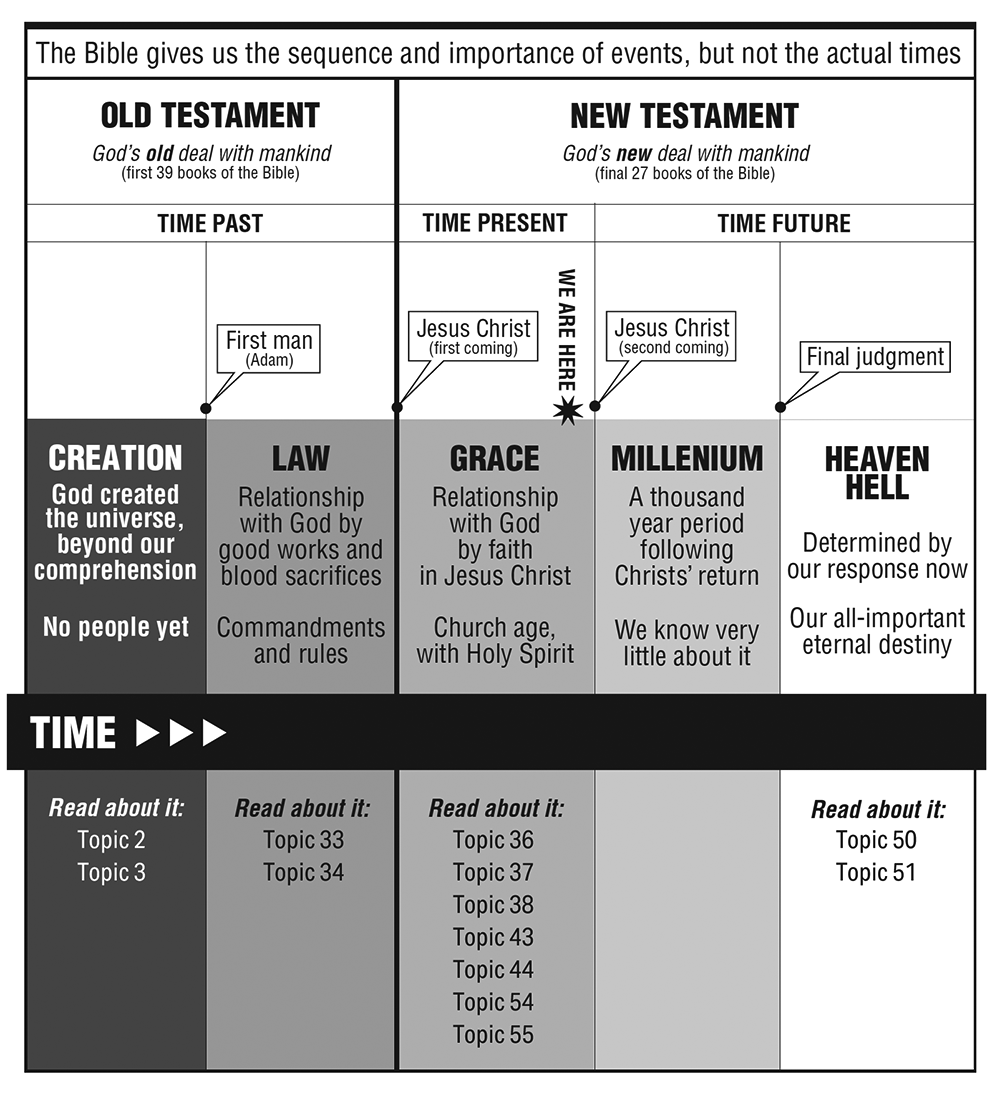 Here’s a sampling of what the Bible says on this subject.

II Thessalonians 2:1-3
Next stage in God’s plan is called ‘the day of the Lord,’ when Jesus Christ will return