In our modern world, we use mathematics to test almost everything for reliability and to express degrees of confidence. A common test method is the application of probability theory. A probability, expressed as a ratio, is the likelihood of something occurring or being true. For example, when we toss a coin, the probability is .5 (one chance out of two chances) that it will land heads up.

HOW TO TEST THE BIBLE IN CASE OF DOUBT

Our objective here is to calculate the probability that the Bible could be a mere human book, written without God’s direct supernatural involvement. The probability can be calculated on the worksheet at the top of the following page.

Therefore, to allow for individual differences of opinion, the reader is asked to supply his own inputs to the equation (next page) as follows:

Everyone will use different inputs for the above test, but it really doesn’t matter because even using inputs from the most skeptical person, the test will show beyond reasonable doubt that the Bible is a supernatural book (i.e., God’s book).

For example, suppose someone used these conservative probabilities in the equation: That...

Putting these figures in the worksheet, the answer is .000001 – or one chance in a million – that the Bible could have been written without God’s supernatural involvement. Nothing like that can be said about any other book!

In any court of law, probabilities of this magnitude would be regarded as absolute proof that the Bible IS God’s book to man­kind! In light of all this evidence, people who don’t believe the Bible come to that decision not on the basis of investigation but simply because they choose not to believe.

Because there’s such overwhelming evidence that the Bible is God’s book, we have confidence that it’s his special message to us. It surpasses anything man could write. Thus, we can rely on it for essential and accurate information about the meaning and purpose of life.

This conclusion determines what we do next! 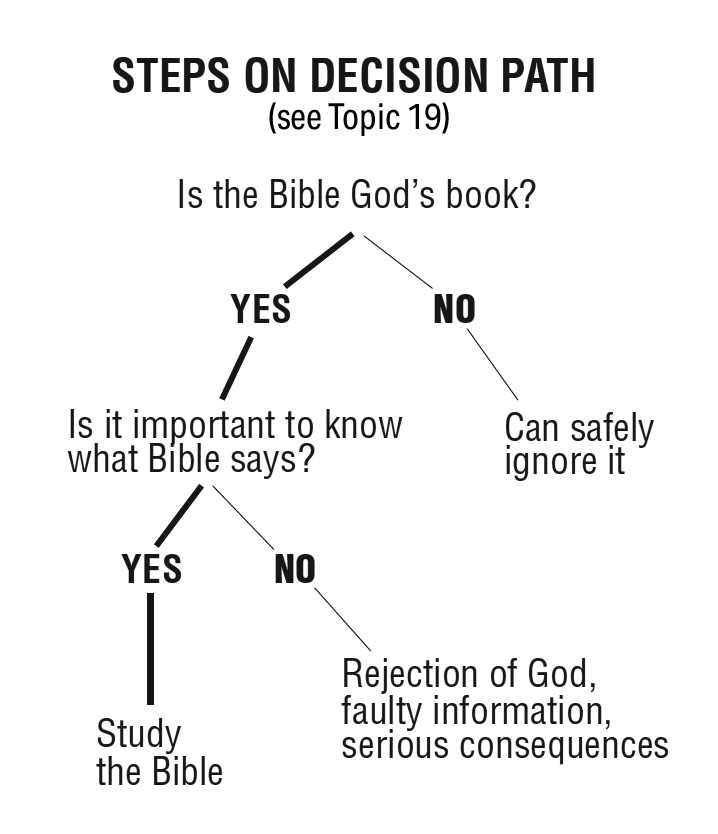 If the reader con­cludes that the Bible is just another human book, there’s little value in continuing with the remaining sections of this resource. The reader might just-as-well go to a bookstore and select any book on religion, philosophy or self­ improvement. If the Bible is not God’s book, then no book is, and thus there’s no information from God, just human opinion.

However, if the reader concludes that the Bible really is God’s message to us, he’ll be eager to learn all the important things God says in it (as summarized in the following topics).