THE BIBLE TELLS ABOUT EVENTS BEFORE THEY HAPPEN

A measure of one’s knowledge is the ability to accurately predict in detail what will happen in the future. If the Bible is God’s book, we would expect that in it God would make statements about the future which prove to be correct. Furthermore, we would expect that he would not make any statements about the future which prove to be incorrect. While we expect only a percentage fulfillment in man’s predictions, we expect perfect fulfillment in God’s predictions. Therefore, our confidence in the Bible depends upon the accuracy of Bible prophecy.

The word ‘prophecy’ – used throughout the Bible – means prediction of the future with divine knowledge. In Old Testament times, before Jesus, God revealed certain knowledge of the future to prophets who spoke for him in foretelling coming events, usually warnings. For example:

The Prophet Ezekiel said that the large Babylonian city of Tyre would be scraped away so that only bare rock would remain (Ezra 26:4). About 60 years later, Alexander the Great, in a famous seven-month siege of the city, tore down its walls and buildings and with the rubble built a causeway to a nearby island. The city was literally scraped away. Today fishermen dry their nets on the bare rock site of the old city, never rebuilt, exactly as foretold in the Bible (Ezra 26:14).

Every day the world’s newspapers report on the conflict between Jews and Arabs, as the Bible outlined the problem thousands of years ago. The Bible said – as diagrammed in Topic 12 – that the descendants of Israel (ancestral father of Jews) and Ishmael (ancestral father of Arabs) will live in hostility to each other (Genesis 16:11-12).

The Bible said further that the Jews would be scattered throughout the earth without a homeland of their own (Hosea 9:17). Over a thousand years after this prophecy, the Romans destroyed Jerusalem in 70 A.D., and the Jews lost their land and dispersed throughout the world.

But the Bible also said that the nation of Israel would be restored (Jeremiah 31). People scoffed at this prophecy, saying it would be impossible for the weak and scattered Jews to get their land back after nearly nineteen centuries. However, in one of the most amazing political phenomena of our time, Britain and the United Nations in 1948 forced the Palestinians to surrender land to a new nation – Israel! And the furor over this highly improbable turn of events – predicted thousands of year ago in the Bible – is still in the headlines today.

ONLY GOD CAN HAVE 100% ACCURACY

There are hundreds of prophesies in the Bible – written long before the actual events – which have come true exactly as predicted. What’s even more amazing is the fact that none of the prophesies has been wrong!

If a person could make an almost infinite number of predictions, he could produce an impressive list of fulfillments. The real measure of accuracy, however, is not the number of fulfillments but rather the ratio of right predictions to wrong predictions. In foretelling future events, the Bible has been 100% right – 0% wrong – a record impossible by even the best of concerted human ability. Only God can have 100% accuracy, and therefore the Bible must be his book.

Not all Bible prophecy has been fulfilled yet. There are a considerable number of future events of enormous consequence recorded in the Bible which have not yet occurred. These future events are not cited here because they cannot yet be offered as proof for the Bible’s accuracy. Only time will prove them. 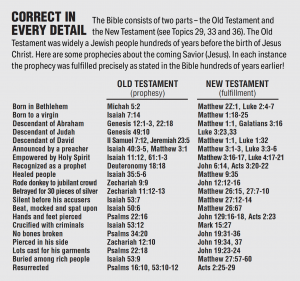 Here’s a sampling of what the Bible says on this subject.

Isaiah 44:28
Cyrus (identified by name even before he was born) would be used by God to guarantee Jews’ return to Jerusalem and restoration of Temple (prophesied about 688 B.C., fulfilled 539 B.C.)

Jeremiah 25:12
Babylon would be severely punished for destroying Jerusalem and exiling Jews (prophesied about 605 B.C., fulfilled when Cyrus the Great conquered Babylon in 539 B.C.)

Jeremiah 29:10
Jews would spend 70 years in Babylon, then God would bring them back to their homeland (prophesied about 594 B.C., fulfilled in 537 B.C. when Zerubbabel lead first group of captives home)

Revelation 1:3
Prophecy is a blessing from God

CORRECT IN EVERY DETAIL

The Bible consists of two parts – the Old Testament and the New Testament (see Discoveries 29, 33 and 36). The Old Testament was widely known and read by the Jewish people hundreds of years before the birth of Jesus Christ. Here are some prophecies about the coming Savior

(Jesus). In each instance the prophecy was fulfilled precisely as stated in the Bible hundreds of years earlier!