FORTY WRITERS HARMONIZE AS ONE

Approximately 40 different people, working independently, were used by God to write the Bible (see Topic 29 for names). They came from different geographic areas, different political systems and different social situations. They came from different walks of life – including a king, farmer, shepherd, doctor, fisherman, priest, philosopher and tax collector. They ranged from educated to uneducated, from rich to poor. They lived on three different continents, spanning a period of more than 1,500 years.

Amazingly, when all of these independent writings are put together, they read as a single coordinated volume.

To get some idea of the remarkable unity of the Bible, think about what kind of a book we would get by combining the religious writings of 40 different people who, in different centuries and different countries, expressed their convictions on controversial topics. The composite of these writings would be a potpourri, and no one would regard it as a single message.

The Bible is like an orchestra playing a symphony in concert: many people playing different instruments but together producing beautiful harmony from the mind of the composer. Without the composer, who makes unity from diversity, the players would only make discordant noise.

The harmony within and among the 66 writings that comprise the Bible is evidence that the Bible is God’s book.

THE BIBLE REJECTED ‘SCIENTIFIC’ VIEWS OF THE DAY

Here are examples of ‘scientific’ views commonly held at the time the Bible was written:

But the Bible said God created man and woman as a special human (not animal) creation (Genesis 1:27). Recent discoveries by scientists with newer and better instruments, through mitochondrion DNA analysis, show that all races have a common ancestor, a woman who lived thousands of years ago, leaving resilient genes carried by all of mankind. In the scientific community – as in the Bible – they call her ‘Eve.’

Science is constantly changing, and each change usually brings it closer to the Bible.

THE BIBLE GIVES SUPERIOR KNOWLEDGE OF THE WORLD

If the Bible were merely a human book, it would no doubt express the conventional understanding of the day in which it was written. It would likely say or imply, for example, that the earth is supported by giant pillars or that the earth is flat. If it were merely a human book, it would not make statements that would be regarded as ridiculous at the time it was written (like gravity, round earth, molecular composition, television).

The fact that the Bible makes statements that were out of step with the thinking of the day – even though later proved correct – reveals that the writers were given superior knowledge of the world.

The Bible would be discredited today if it said, for example, that the world was hatched from a huge flying egg. That was the latest theory of origins held by the Egyptians in Moses’ day. Since Moses was trained in the Pharaoh’s palace, we might expect him to reflect that view, but instead, as a Bible writer, he wrote that God created the world.

In 1861, the French Academy of Science listed 51 ‘incontrovertible facts’ which supposedly proved the Bible to be wrong. But today, in light of new knowledge, no scientist would believe more than a few, if any, of those 51 statements. There are now tens of thousands of obsolete books on science which reputable scientists will no longer use. The science books have changed, but the Bible is more credible than ever. 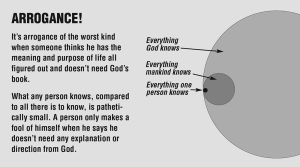 The Bible is our primary means of getting spiritual knowledge from God.