USE OF THE WORD ‘CHRISTIAN’ REQUIRES DEFINITION

The word ‘Christian’ means different things to different people. This causes communication problems because the word evokes stereotypes and emotions which distort the message. The difficulty is compounded because there are no synonyms and because repeated definition is cumbersome and impractical.

‘Cultural’ refers to the meaning given by society. It focuses on what church members do, or at least what they should do. It emphasizes clean living, honesty, generosity and good works. ‘Biblical’ refers to the meaning given by the Bible. It focuses on who we are, not on what we do. It emphasizes the problem of sin, our own inadequacy to overcome it, and why we need God (Jesus Christ) to save us from our predicament. 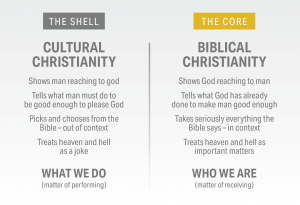 All that goes by the name Christian is not in fact Christian! What most people know and observe is cultural Christianity. But this is NOT real Christianity. It’s only an outer shell, largely hiding the real thing. At the core of Christianity is God, not our theologians, rituals and good works.

In this resource, Christianity always means biblical Christianity – the core of it, the real thing, in its pure and simple form – as stated by God in the Bible, not necessarily as portrayed or practiced by church or society.

Statistics on the Christian population generally refer to the broad spectrum of Christianity – cultural and biblical – and therefore greatly overstate the number of real Christians. In fact, as calculated in Topic 17, it appears that only about 5% of the world’s population is Christian by God’s definition. Topics 53-70 – and particularly Topics 62 – define ‘real’ Christianity. 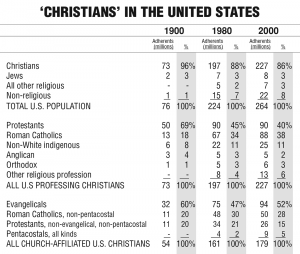 Here's a sampling of what the Bible says on this subject.

John 15:8-9
Jesus: ‘These people honor me with their lips, but their hearts are far from me. They worship me in vain; their teachings are but rules taught by men.’

Data on this page was compiled from WORLD CHRISTIAN ENCYCLOPEDIA.